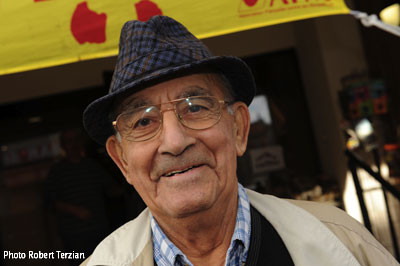 Jean Garbis Artin was born in1930 , in Marseilles, Saint Jérôme to Armenian parents who had fled their country to escape the1915 genocide. He became an activist at an early age and fought to advance the armenian cause in every way : chief scout at 17, Regional Commissioner of the Armenian Scouts, Garbis got involved in the community projects as he became the team leader and manager of the local armenian football club ( UGA Ardziv). He worked with several associations and participated in all the actions to promote the recognition of the Armenian Genocide.

In the aftermath of the 1988 earthquake, he went several times to Spitak both to drive and to build the construction of cabins sent by the local and regional authorities ; he also escorted the pharmaceutical and medical aids to various regions of Armenia.

In 1997, with some his ever-faithful friends, he founded the Association for the Research and Archiving of Armenian Memory ( ARAM ). Since then, he worked relentlessly and collected books, documents, testimonies, photographies, family archives which debunk the denial of the Turkish government.

He had his heart set on welcoming researchers, journalists, students and people to tell them his stories, anecdotes and explain the documentary evidence registered in ARAM

Garbis Artin played a great part in the community by organizing exhibitions, conventions everywhere in France. His energy and enthusiasm emulated active members and his actions let a print in the armenian diaspora.