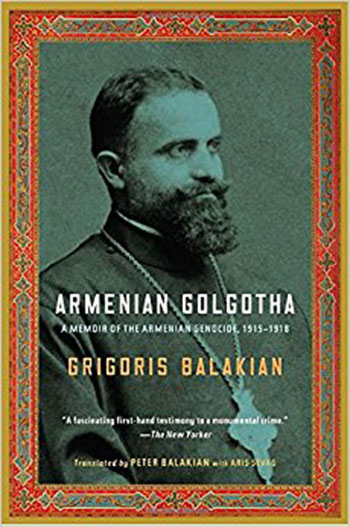 VOLUME 1 The Life of an Exile (07/1914-04/1916)PART I July-October 1914 In Berlin before the War Return to Constantinople from BerlinThe First DeportationPART II April 1915 – February 1916 The General Condition of the Armenians at the Beginning of 1915 The First Bad News from Cilicia : the Secret Messenger The Night of Gethsemane Red Sunday Toward a Place of Exile : The Names of the Exiles in Ayash Life in Chankiri Armory : The Names of the Deportees in Chankiri Life of the Deportees in the City Plan for the Extinction of the Armenians in Turkey The Armenian Carnage in Ankara The Tragic End of Deportee Friends in Ayash The Tragic End of the Chankiri Deportees The Deportation and Killing of Zohrab and Vartkes The Armenians of Chankiri in the Days of Horror The General Condition of the Armenians at the Beginning of 1916 Second Arrest and Imprisonment From Chorum to Yozgat From Yozgat to Boghazlian : The SkullsPART II February-April 1916The Second Deportation: The Caravan of Death to Der Zor The Confessions of a Slayer Captain Encountering Another Caravan of the Condemned From Boghazlian to Kayseri: The Halys River Bridge and the Bandits of the Ittihad Kayseri to Tomarza Tomarza to Gazbel Gazbel to Hajin Hajin to Sis Sis to Garzbazar Garzbazar to Osmaniye Osmaniye to Hasanbeyli: The Sweet Smell of Bread Islahiye: A Field of Mounds for Graves Bad News from Der Zor Escape from Islahiye to AyranVOLUME 2 The Life of a Fugitive (April 1916 – January 1919)PART II In the Tunnels of Amanos Escape on the Way to Ayran-Baghche (Vineyard) The Remnants of the Armenians in the Amanos Mountains Signs of Imminent Nex Storms The Treatment of the Armenians by the German Soldiers The Ghosts of Ten Thousand Armenians Women in the Deserts of Ras-ul-Aïn The Deportation and Murder of the Armenian Workers of Amanos Bloodshed on the Way from Baghche to Marash: A German Nurse Goes Insane The Suffering of British Prisoners of War at Kut-Al-Amara The Program of Forced Islamization: Escape from Baghche to InjirliPART III In the Tunnels of the Taurus Mountains(Map: Constantinople-to-Baghdad Railway) The Self-Sacrifice of the Armenian Workers of the Baghdad Railway Fragments of Armenians in the Taurus Mountains In the Deep Valley of Tashdurmaz Life in Belemedik The Deportation of Patriarch Zaven Der Yeghiayan from Constantinople to Baghdad Legions of Armenian Exiles in Konya and Bozanti Meeting Armenian Intellectuals on the Road to Belemelik Escape from Belemedik to AdanaPART IV In Adana, January 1917-september 1918 The General Consition of the War at the beginning of 1917 A Mysterious Patient in Adana’s German Hospital The Condition of the Remaining Armenians in Adana

Translated by Peter Balakian with Aris SevagOn April 24, 1915, Grigoris Balakian was arrested along with some 250 other leaders of Constantinople’s Amenian community. It was the beginning of the Ottoman Empire’s systematic attempt to eliminate the Armenian people from Turkey – a campaing that continued through World War I was and the fall of the empire. Over the next four years, Balakian would bear witness to a streemingly endless caravan of blood, surviving to recount his miraculous escape and expose the atrocities that led to over a million deaths.Armenian Golgotha is Balakian’s devastating eyewitness account – a haunting reminder of the first modern genocide and a controversial historical document that is destined to become a classic of survivor literature.