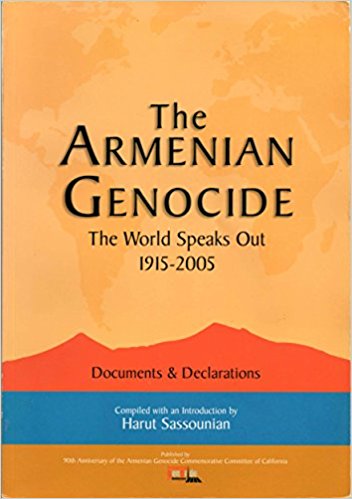 The publication of « The Armenian Genocide: The World Speaks Out » marks 2005 the 90th year of the attempted annihilation of the Armenian people perpetrated by the Ottoman Turkish Government of 1915. Through the assembly of official documents and declarations of/by the International Community, as the world has shown its growing understanding of the magnitude and consequences of the Armenian Genocide, Mr. Sassounian demonstrates the case that this gruesome example of « Man’s Inhumanity to Man » by its predecessors must be recognized by the present Turkish Government and adequate reparations be made.

This year marks the 90th anniversary of the Genocide perpetrated against the armenian people by the ottoman turkish Government. The Genocide was the implementation of a zealous and diabolical plan that aimed at the total annihilation of the armenian people in their historic homeland.Even though the perpetrators of the genocide were not completely successful in their conspiracy, they nevertheless caused the massacre of 1,5 million armenian men, women and chidren.

This publication is sponsored by the community-wide Commemorative Committee of the 90th Anniversary of the Armenian Genocide in Beirut, Lebanon. It is a compilation of documents and declarations that attests to the international Acknowledgement of the armenian Genocide in the past 90 years, as the world increasingly understands and appreciates its magnitude and consequences. However, despite the growing recognition and condemnation of this gruesome example of « Man’s Inhumanity to Man », the present-day turkish Government not only has to recognize but also continues to deny the Culpability of its predecessors and its responsibility to make adequate reparations.

The Commemorative Committee would like to commend Mr.Harut Sassounian, who graciously accepted the Committee’s invitation to prepare this publication and produced a very valuable and informative book that we are so proud to sponsor.

On this occasion, we would like to express our gratitude to Hamazkayin « Vahe Setian » Printing & Publishing House for its contribution to this publication.