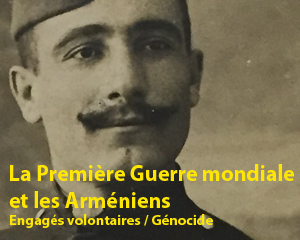 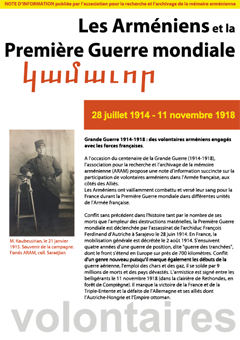 On the centenary of WWI (1914-1918) the Association for the Research and the Archiving of Armenian Memory (ARAM) proposes a short memorandum on the commitment of tne Armenian volunteers in the French Army on the Allies sides (PDF in French).

The Armenians bravely fought and shed their blood for France during WWI in different sections of the French Army. This period was propitious to the Ottoman Empire, one of Germany’s allies for it to commit the genocide of the Armenians (1915-1917), slaughtering 1.500.000 people.
WWI was an unprecendented conflict in History because of the number of dead and of tne scale of the material destructions as well.It all started withe the assassination of the Archduke François-Ferdinand in Sarajevo on June 28, 1914. In France, the general mobilization was ordered on August 2 ,1914. Then, four years of position war – so-called ‘Trenches War- the front of which spread on nearly 700 kilometers in Europe, took place.
It was a new type of conflict with the beginning of the ‘Air War’ , the use of tanks and gaz.It ends with 9 million dead and devastated countries.On November 11, 1918, the armistice was signed by the belligerents in the Rethondes clearing, in the Compiègne Forest. It marks the French and ‘Triple-Entente’ victory and the defeat of Germany and its allies, among which Austria-Hungary, and the Ottoman Empire.

For thousands of volunteers who wanted to enrol , their first motivation is the feeling of gratefulness and moral duty towards France. Besides , that can be understood with the calling made on July 29, 1914 – published in ‘Le Matin’ on August 2, 1914- by a group of foreign intellectuals . Among them, there are personalities such as the writer Blaise Cendrars who wrote : « Foreigners, friends of France, who – during their stay in France- learnt how to like and treasure it as a second motherland -, feel the pressing desire to offer their arms to France. »
This calling was followed by a great number of other ones from immigrants or refugees of different nationalities : Greeks, Pols, Syrians, Armenians, foreign Jews…

As soon as August 5, 1914, the Armenians who lived in Marseilles held an important meeting and decided to issue a warmful calling to their fellow countrymen so as to take side with the Allies.
This call was written by Aram Turabian and was issued in a lot of newspapers. In his book entitled « Les volontaires arméniens sous les drapeaux français » (The Armenian volunteers in the French armed forces) , Aram Turabian gives a list of 400 Armenians who willingly enrolled in the French Army.

Not only were there sections of Armenian volunteers , bur we must mention the Armenian Legion which was settled according to the French -Armenian agreement signed on October 27, 1916 and negotiated by Boghos Nubar , the president of the Armenian National Board . The Armenian Legion was a unit of the French Foreign Legion and was set up to fight the Ottoman Empire , notably in Cilicia , during WWI . Mainly composed of Armenians – refugees from the Ottoman Empire and joined by fellow countrymen from abroad, its aim was to support the conquest of Cilicia by France which intended to set up a protectorate there at the end of WWI , in agreement with Great-Britain and Russia.

It was first called ‘Legion d’Orient’ (Eastern Legion) , and afterwards Armenian Legion on February 1st, 1919. Its study can enlight a glorious episode which tends to be underestimated in History and in the Armenian memory. 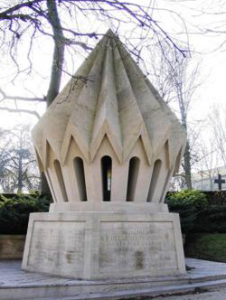 In the ‘Père Lachaise Graveyard’ in Paris, one can see a monument dedicated to the Armenian soldiers who died during WWI ‘ A la mémoire des Arméniens morts pour la France’situated in ‘ Allée du Levant avenue de combattants étrangers 88ème division’. It was unveiled on April 15, 1978. It pays tribute to the Armenian volunteers who fought during WWI and to the WW II Armenian resistance fighters as well.

The digitized version of Aram Turabian’s book is available on the Association for the Research and the Archiving of Armenian Memory (ARAM) website (it is free). Les volontaires arméniens sous les drapeaux arméniens. Published in 1917 in Marseilles.