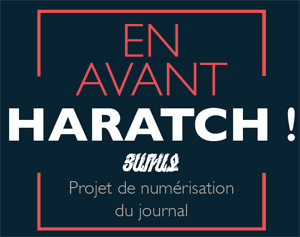 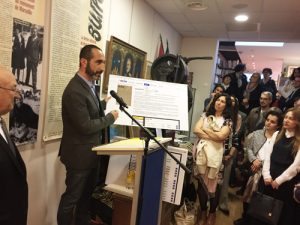 On April 5 2018, members of the Association for the Research and the Archiving of Armenian Memory (ARAM), volunteers and partners were gathered in Marseilles to introduce the digitization and the setting on line of every issue of the Armenian-written daily newspaper HARATCH.

HARATCH means ‘En Avant’ in French, ‘Forwards’ in English. But paradoxically, what was about last April in ARAM* premises was a ‘backwards’ return on the history of the daily and how important it used to be for the Armenian diaspora in France.

During this particularly moving evening meeting, its chairman of The Association for the Research and the Archiving of Armenian Memory (ARAM) Jacques OULOUSSIAN, introduced the result of a huge and unique – as well- work : the digitization of every issue of the daily HARATCH and their putting on line, freely accessible on the Association website.Two achievements , with in addition the digitization and putting on line of the literary and bilingual supplement Midk ev Arvest (Thought and Art), published every month between 1976 and 2009 in the daily HARATCH which can be read on www.webaram.com

A wide-spread and shared information

What is at stake with this digitization work is completely in keeping with ARAM’s objectives : archiving the Armenian memory and making it accessible to an audience as wide as possible. When he delivered his opening speech, Jacques OULOUSSIAN said : « Every archive we have, such as books, photos, maps, posters, registers, identity documents , pieces of paper on which Armenian words are written , pieces of music on vinyl records, we can’t know the number of them any more (…) We decided to save and share these archives when as soon as 2011 we chose to digitize the most fragile, the most precious elements. But also a major daily in the Armenian press in France : HARATCH. »

A link between every member of the Diaspora

Founded by the journalist Schavarch MISSAKIAN, it was published by his daughter Arpik after his death in1957. HARATCH was the first daily published in Armenian language in Europe from 1925 to 2009. Not only did it provide news to its readers, but HARATCH was also a ‘go-between’ for the Armenian diaspora who had taken refuge in France after the Genocide perpetrated by the Young Turks from 1915 and who had spread all over the French territory. Compare to its circulation and means – rather modest ones- HARATCH was very important for the entire community : this four-page daily was read and commented in most of the Armenian homes and other places where Armenian people met.

More than just a Daily

« The newspaper and its founding father acted as a father, a guide , an adviser, even as a teacher for the Armenians settled in France even for those from all over the world. » as the writer Krikor BELEDIAN reminded it during the evening party for the introduction of the digitization of HARATCH. According to Mr BELEDIAN « not only was it seen as a support for news and analysis, but for teaching as well. Thanks to its columns, a large number of readers learn their language, their History, their Literature. » Indeed, HARATCH has this specificity : it is written in Western Armenian, the language spoken by the Armenian who lived in rhe Ottoman Empire, and by their descendants as well.

This aspect has held the attention of Calouste GULBENKIAN Foundation, one of the main donors who allowed HARATCH digitization financing. When it was her turn to pitch, Ani GARMIRYAN, who is responsible for the Senior Programme and who is also in charge of the promotion of Western Armenian, insisted on Calouste GULBENKIAN Foundation’s main aim : « Making accessible every Armenian-written issue to a wide audience of readers, seachers, thanks to digitization so that all these documents should not remain in Museums, but carry on being read , living and being. »
Apart from Calouste GULBENKIAN Foundation, other partners and private donors took part in the 22.214 HARATCH issues digitization, in other words 90.000 pages , which is equal to 600 Go data, after a first phase – which stands for 10 years’issuing- was financed by the Association’s own funds in 2011.We must not forget to thanks the ‘Conseil Départemental des Bouches-du-Rhône’ for its support to the Association running.

Jacques OULOUSSIAN, the Association chairman, reminded that : « On the same year, we convinced the ‘Culture and Communication Ministery’ to help us carry on the digitization for 2 years in the context of their National Plan of Digitization, then we carried on one section after the other with our donors’help. In 2016, with the BULLUKIAN Foundation’s contribution, the section from 1960 to 1969 could be done. Finally, we launched the 1970-2009 section digitization with C.GULBENKIAN Foundation. » 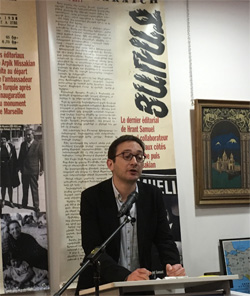 While she was still alive, Arpik MISSAKIAN, HARATCH founder’s daughter, – who became the newspaper editor when her father died- gave her agreement for the Association to digitize every HARATCH issue. But, in the mean time, she decided to deposit all the issues published for more than 80 years at the ‘BULAC (Bibliothèque Universitaire de Langues et Civilisations/ Languages and Civilisations University Library). Benjamin GUICHARD, its scientific director, attended the presentation evening organised by the association. When it was his turn to speak, he insisted on how important this gift was. « All along the year, we recieve a lot of documents, but getting one which holds so much life and energy is very rare in a librarian’s life.»

« What is mainly at stake is ‘LANGUAGE’ »

According to the BULAC scientific director, « (…) these 99 bound volumes which are settled on a twenty-meter shelf-space in our library are regularly borrowed. Readers can continually be seen immersing themselves in these dailies. The quality of the Digitization work will give them a new start : they will spread on a wider scale. I have understood that what is mainly at stake is ‘Language’ : that’s the reason why Arpik MISSAKIAN chose us. These newspapers had to live among Armenian-written books and thanks to the association digitization, Schavarch and his daughter Arpik’s work will carry on being read..and existing. » Benjamin GUICHARD concluded his speech with these last words.

Getting over the technical constraints

As soon as 2011, the COPEIA firm started to digitize HARATCH , but the work in itself , as Régis ROGER, its representative, reminded, « (…) had not been an easy one. The newspapers were kept in bound volumes so a specific scanner and particular care as well were needed because of the fragility of the paper, particularly breakable. » Finally , all these difficulties – technical ones and search for financing – were overcome after 7 years of efforts made by the Association board and more particularly by his secretary, Vartan ARZOUMANIAN.
Jacques OULOUSSIAN, the Association Chairman, summed up this marahon by : « It was a crazy challenge. But we made it, all together. »

Among the audience, with the members and volunteers of the Association, well-known people were present : Aurore BRUNA, Chairwoman of the CCAF Sud (Armenian organisations from France coordination board), Richard SANTOURIAN Chairman of the Armenian Funds from the South of France, Liana GHYKASYAN (Third Secretary of the Armenian Embassy in France), Rouben KHARAZIAN , Armenian Republic Consul in Marseilles, and Garo HOVSEPIAN, Chairman of the ‘Armenian Youth and Culture House.’